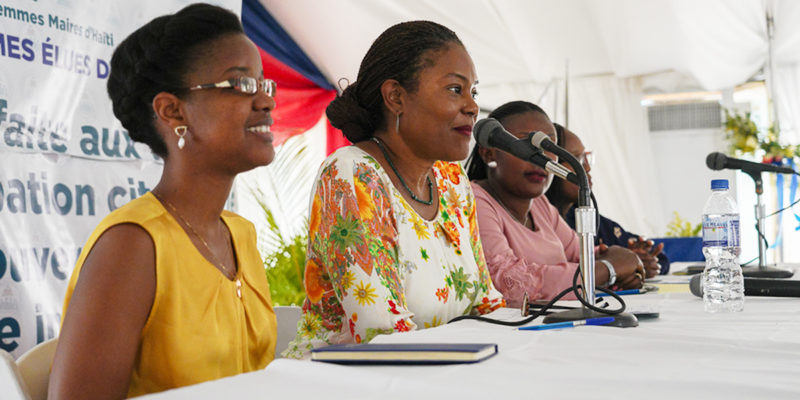 For Didi Bertrand, cultivating leadership is grassroots work. The organization she founded, Women and Girls Initiative, helps develop leadership in young people – particularly those with the greatest need. In Rwanda and Haiti, young women and girls receive scholarships, leadership training and other supports to offset their economic, societal and psychological hardships.

The way you can prepare the next generation of female leaders is to keep them in school.

Women and Girls Initiative pays for tuition, transportation and meals. In Haiti, it also sends girls to a Summer Leadership Academy, where a major focus is addressing psychological trauma (often caused by natural disasters) using art.

The idea is not to create a few superstars, but rather, Bertrand says, “a critical mass, a group of young people that can go forward together, that has the same vision, the same perspective in terms of what kind of change needs to happen in this country.”

Bertrand is from Haiti but lived for several years in Rwanda with her children and husband, Paul Farmer, co-founder of Partners in Health. She thinks Haitians have a lot to learn from Rwandans about building leadership in the wake of a disaster (and she believes that ten years after the Haiti earthquake, one can still talk about rebuilding). Leadership, Bertrand says, was an important part of the series of principles Rwandans put in place to rebuild after the 1994 genocide. That leadership, she says, was about making decisions collectively. “Community participation is an important point because one must take ownership of what is being put in place,” she says. “You can’t dictate. You have to come together to find solutions.” And you must have ongoing communication between leaders and the people, she says.

Bertrand also sees models of leadership in Haiti. In 2018, she invited Rosemila Petit-Frère to speak at the Summer Leadership Academy as mayor of Akayè. “She gave a beautiful presentation,” Bertrand says, about “challenges, how she overcomes obstacles she faces in her work, and also about the importance of staying in school, and being engaged in the community.”

When Petit-Frère decided she wanted a Rwandan delegation to participate in the 2019 Forum of Haitian Women Elected Officials, Bertrand made the invites and moderated the panel of the three who came.