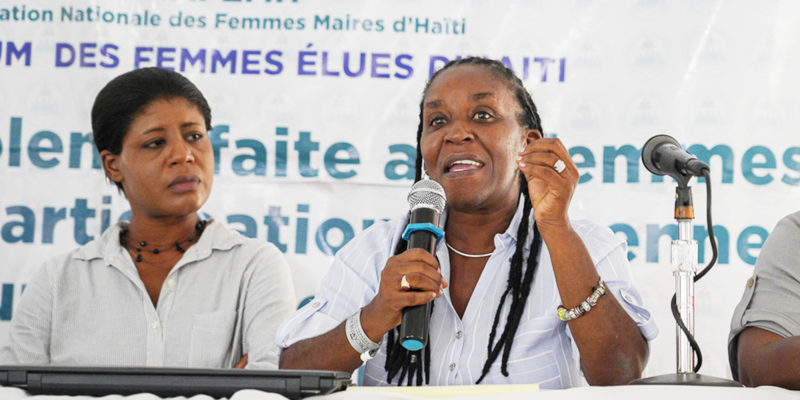 At September’s 2019 Forum of Haitian Women Elected Officials, Josette Macillon, of the group Femmes en Action (Women in Action), talked about leadership by the numbers in Haiti.

On the national level, the stats are bleak. Most notably, in a ranking of Parliaments around the world by their gender balance, Haiti stands at 186 out of 192 countries, with only one woman in the Senate and three in the Chamber of Deputies.

On the local level, however, things look brighter. For example, more than a third of the country’s City Hall leadership is now female.

“It’s the first time in our history that we have so many women elected officials,” Macillon said. She attributed this to a 2015 decree calling for a 30 percent quota for women in local politics, with financial incentives to make it happen. It’s helped women overcome major obstacles to entering politics, Macillon said, including “a patriarchal society,” a lack of “political will” to include women, financial disparities between genders, and women’s burden of domestic responsibilities.

Marie-Ange Noel, of the organization Fanm Deside (Women Decide), is a longtime supporter of quotas for women in politics. She said that the 2015 decree has drawn more strong women into elections, especially from grassroots organizations. The effect, she believes, is exponential.

Women aren’t just there to be there. We believe we have to have models. When we see Mayor Rosemila Petit-Frère, we say that we too can be mayors.

With an effective quota for municipal posts now in place, she said, “feminist organizations have work to do with the women who’ve been elected: We can help them find training, attain power, and exercise their leadership.” The result, she believes, can be more model leaders among women and men who will inspire others to say, “I’m not going to run for office just to run for office. I’m going to run because I know I can serve the community.’”